Or Paso for short, located along the Salinas River 20 miles in land from the Pacific. We have been coming here for years, usually for quick weekends of wine tasting at the more than 200 wineries located in the surrounding hills.

This trip, we joined 28 other campers on a Rainbow RV camping event. The focus of the trip was Saturday night’s “Winemakers’s Cook-Off.” But, we managed to pack the weekend with other activities. In my last post, I highlighted our visit to Lights in the Field. Saturday morning, our local hosts provided breakfast and then some of us went into Paso to checkout the City Park, with its Carnegie Library. 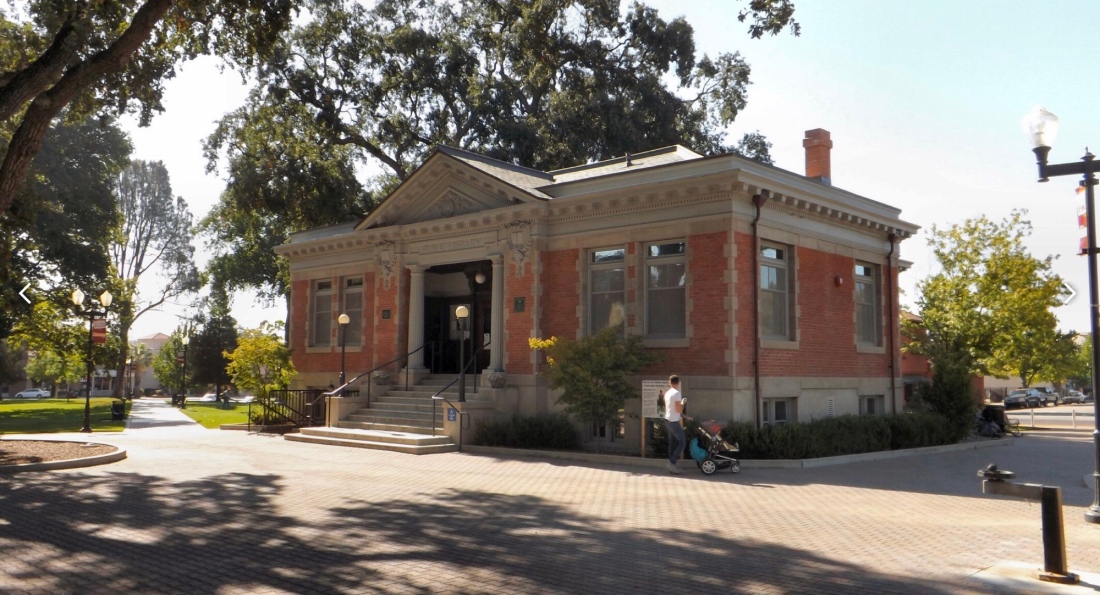 The library, built in 1907-08 from a $10,000 grant from the Carnegie Foundation sits in City Park and today in on the National Register of Historic Places.

Near the Park is the Paso Robles Inn, originally named Hotel El Paso de Robles, the hotel was constructed in 1889-91 using 1 million bricks. Part of the ownership group, at that time was Jessie James’ uncle and aunt, Drury and Louisa James. Jessie used the hotel as a hideout and there are escape tunnels under the ballroom, which was the only part of the hotel saved in a 1940 fire. 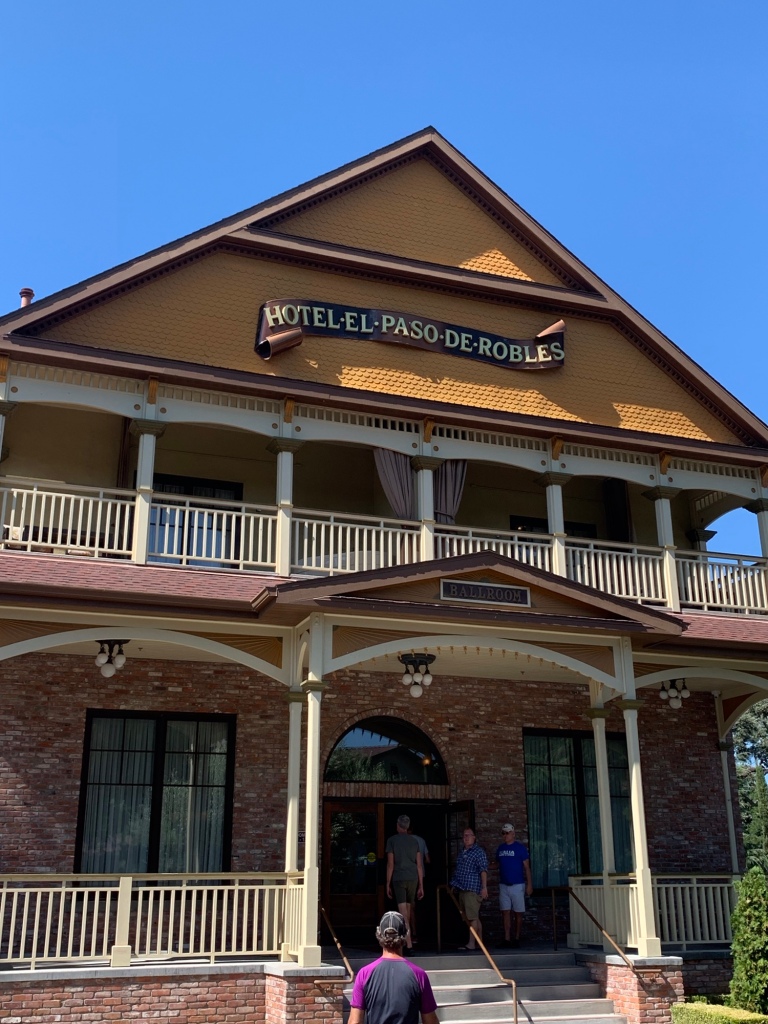 After a nice lunch in town, we headed back to the RV park, to rest before the main event.

The 21st Annual Winemakers’ Cookoff, is an annual fundraiser hosted by the Rotary Club to raise scholarship funds to assist local high school graduates to pay for collage. It is a fun event that brings many of the local winemakers together. Each winery selects both the food item and pairs that with wine from their collection to share with the attendees. All of the food and wine and staff time is donated by the wineries. After entering and verifying that you are of legal drinking age, you are give a wine glass and a plastic plate and then you are on you own.

You are also given 6 tickets, which you use to vote for you favorite wineries. Although there is some chicanery where food and wine are not the only things valued. Some wineries bribe with raffles tickets, free T-shirsts, One even had a Gilligan Island theme, with Ginger, Mary Ann, the Skipper and Gilligan.

Here I am with Gilligan and, I assume, a native islander. Although I am pretty sure he is Greek.

I did give them a couple of voting tickets, and they let me select a message in bottle which said I won a logo T-shirt.

The event lasted 3 hours and during the last hour, a local bakery brought out delicious “Madonna Cakes” to share. I had a great carrot cake. 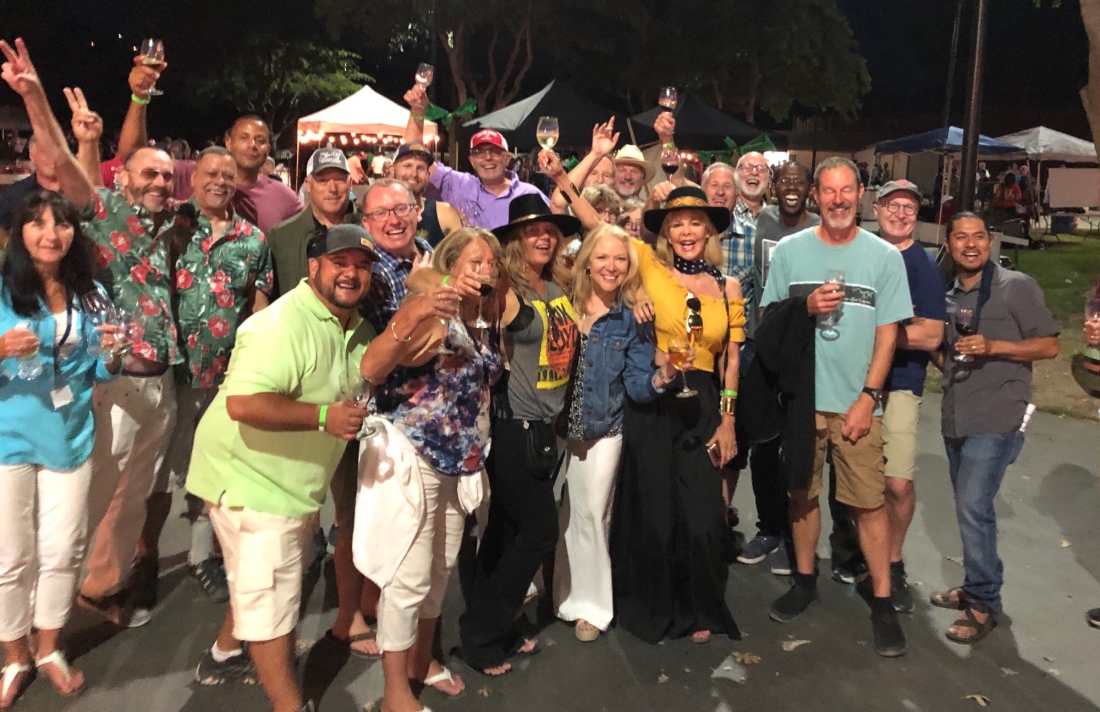 This is our group, except for the woman in orange top. We don’t know who she is, but we tried several photos and she manage to jump in just at the right time.

I can see Bill and I returning for this again.

Yesterday, we went wine tasting with a couple of guys from Palm Springs. We had not met them before, but knew of them as they used own one of the guest houses in the Warm Springs area.

We chose three wineries, had lunch at the first and enjoyed tasking the wines of all three. And quite frankly, for us, that is enough.

After a quick nap, we went out with the group to a local Mexican fish restaurant, Fish Gaucho. It had a very eclectic menu, not restricted to fish. Food was very tasty, well presented and the beverage list had lots of unusual choices.

I had Chile Verde Beef Short Ribs and once I got rid of the over cooked fried egg off the top, it was fantastic, served with a side of jalapeño mashed potatoes. 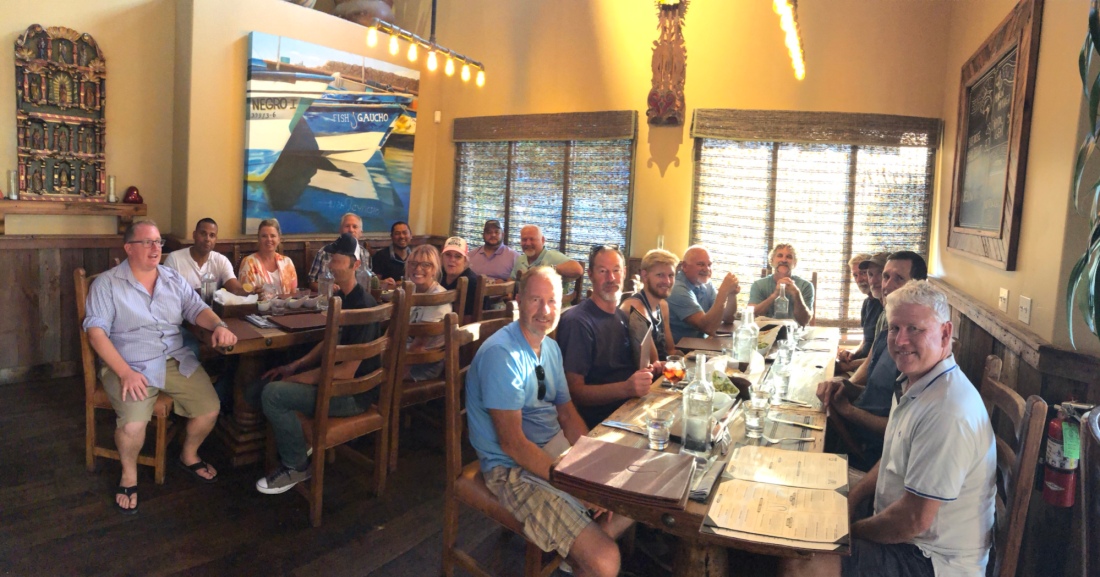 Today, we had out toward Oregon. We will stop for the night in Redding at Green Acres RV Park and plan on being in Eugene tomorrow afternoon, where we will meet Keith and Joanette and begin our 3 week Oregon adventure.