As I mentioned in my last post, we were in a cell and wifi dead zone for the last week. Our week at MMNG was fun. We connected with friends, met new ones and enjoyed some of the activities at camp. Bill and I were a little more low key than in prior years.

It might have been something to do with the weather. It rained at least a little most days and a couple of days were complete washouts. We did notice that Gaea is showing its age. Some TLC is in order for most of the buildings. In years past MMNG members have contributed labor and/or money to upgrade the facilities. it is probably time to do that again.

I did leave camp for a bike ride last Wednesday. It was challenging logistically. Bill drove me about 1 1/2 hours from camp to a point in eastern KC Mo. He headed back to camp and would pick me up later. I began a planned 55 ride along the Bush Creek, Blue River and Indian Creek Bike Trails. My planned end point was in Olathe, KS. Early in the ride, I was riding over dried mud on the asphalt trail. At one point, I approached another section of dried mud, but I realized too late that there was surface dried mud, but underneath was still very wet mud. My tires lost contact with the asphalt and I went down, hard. I was OK, but my Iphone hit hard and gave up the ghost in a couple of minutes. So, I was 50 or so miles from my end point, no way to contact Bill and frustrated. But, I had a general idea of my planned route, and with only a few unplanned detours made my way along Bush Creek and the Blue River and onto the Indian Creek Trail.

Here you can see some of the mud/dirt on the trail. Just past that bridge is where the trail dipped down and the mud was thick. This was along Bush Creek. As I made my way toward Olathe, KS, I realized I was running out of time, so I spotted a Jimmy John’s near the trail, headed for some lunch (great sandwich, btw) and asked one of the workers to let me use his phone to call Bill.

Bill drove to pick me up and we made a, not so quick, stop at the phone store to get a replacement phone.

Final notes: It was a great ride, even with the fall. I’d like to do again sometime in drier conditions and I am really glad Bill was able to help me get through it. The above picture is the only one from that day, since my phone is also my camera.

Saturday night during the awards ceremony, Bill and I noticed several people outside the pavilion looking up to the sky. There was also an odd color in the sky. So, I went to check it out.

The sun was reflecting off this fun cloud formation shrouding us with this strange color.

Yesterday morning, we packed up and headed to St Louis. Here too the rivers are out of their banks, so no Mississippi River Trail ride this trip.

Last night we had Dinner with Brad and Sarah and spent quality time with their 1 year old twins, Teddy and Rylee.

Watching the dinner process for the kids was fun. Lots of healthy veggies, beginning with one of my favorites: Sweet Potatoes. They both put away some food, but Teddy really impressive. That kid can eat!

Afterwards we took a couple of Uncle shots. 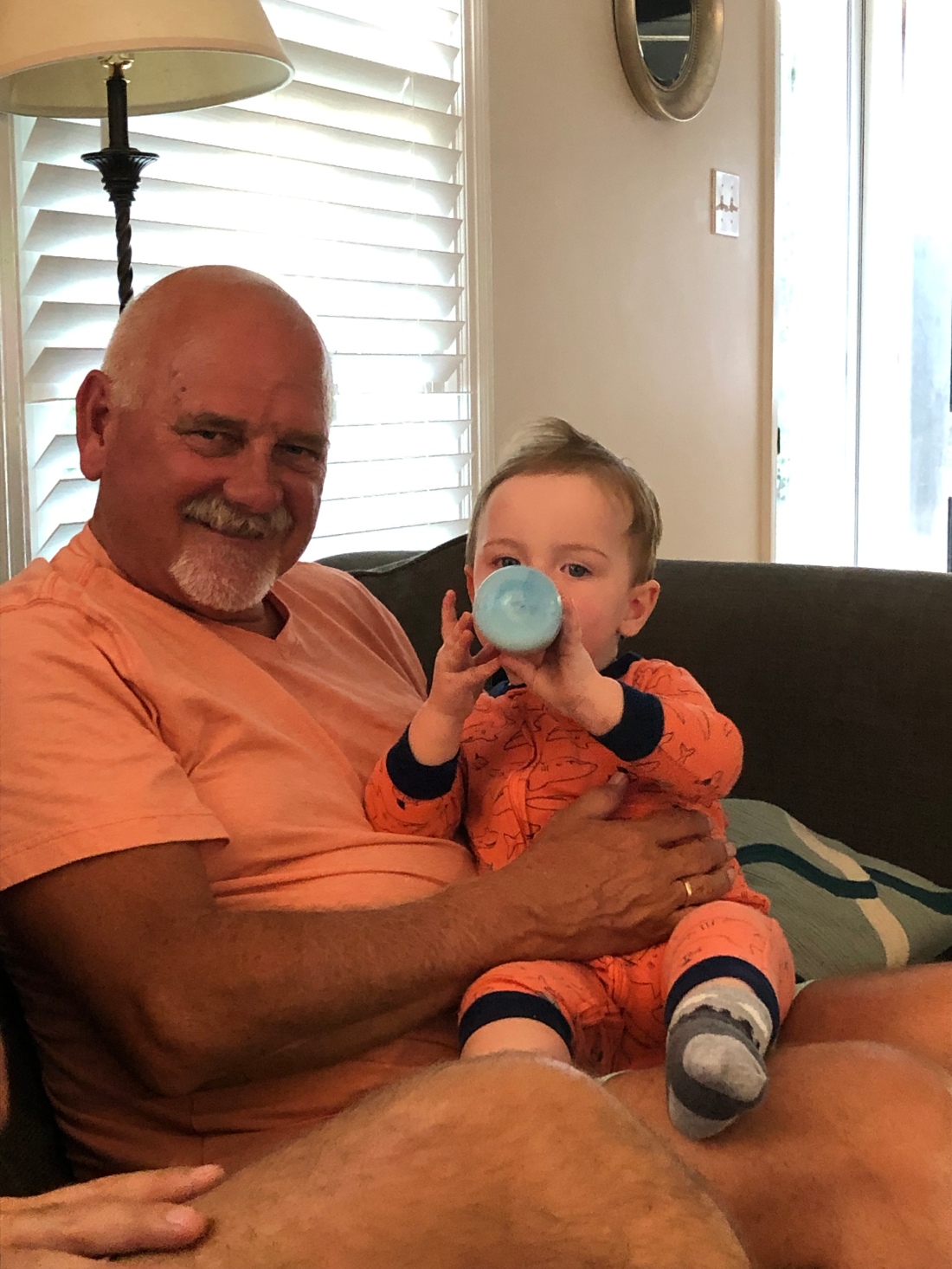 We enjoyed both dinner and time with the young ones, and tomorrow night, we are planning dinner with the grownups, so a baby sitter is in order.

Today, Bill and I biked to Kingside Diner for breakfast and then biked the perimeter trail around Forest Park before the skies darkened. We have eaten at Kingside diber before. I love their Quinoa Pancakes, but the service has been slow both visits. I am going to work on making Quinoa pancakes at home.

Right at the edge of the park was this BP gas station. I was intrigued at both the size and historic nature of the sign. BP merged with Amoco in 1998 and the Amoco brand disappeared in the years following. Of course, some of you may remember that Standard and Amoco had the same logo back then, but that is another story. 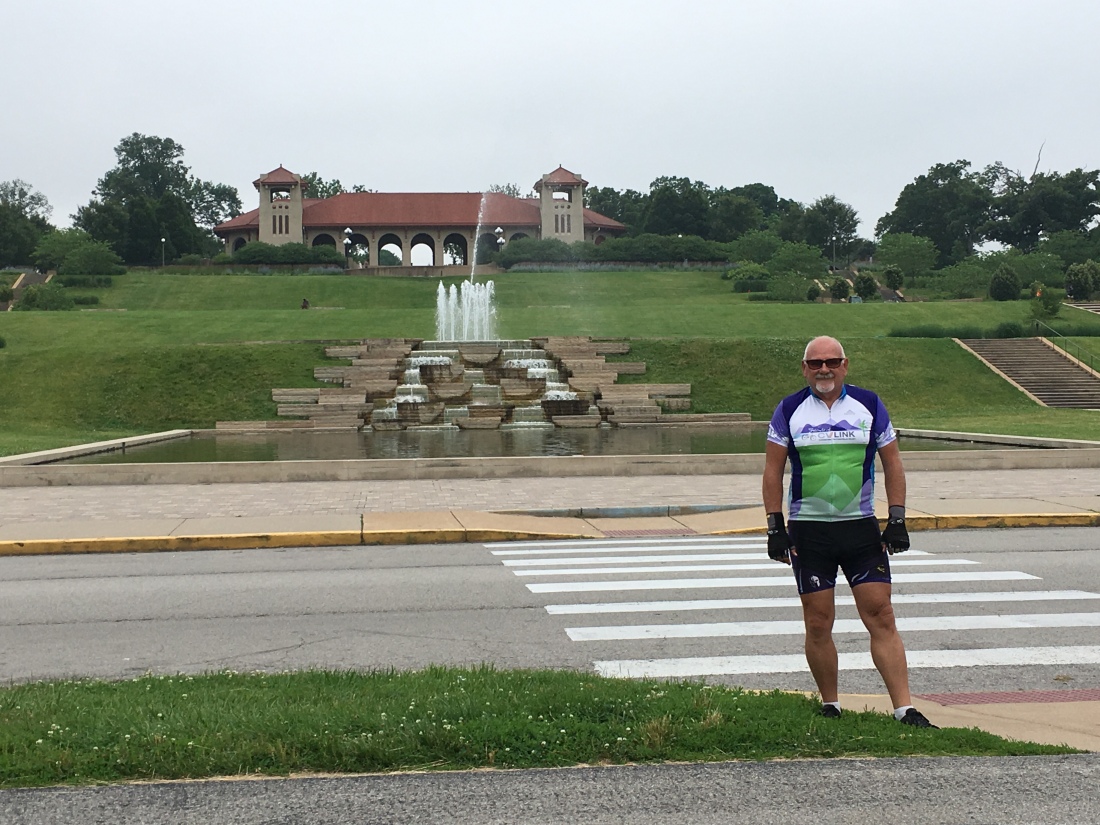 The World’s Fair Pavilion, built in 1909, from proceeds from the 1904 St. Louis World’s Fair, formally known as The Louisiana Purchase Exposition.

Just after this was taken, the skies darkened and the pending rain moved closer. We headed back to the trailer and arrived just as the first drops began falling. So now you are all caught up!

One thought on “It has been a week!”